Information about common and serious dog diseases that your vet may vaccinate against:

Is it possible to vaccinate against all diseases? 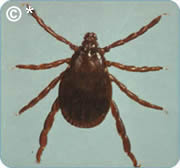 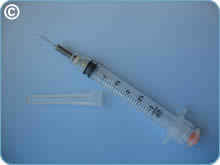 Rabies kills more than 50 000 people annually throughout the world (www.worldrabiesday.org). Vaccination is thus vital, not only to protect your pets, but yourself, your family and the broader community we live in.

This widely feared pet disease is transmitted to all warm-blooded animals, including humans, mainly through the bite of an infected animal. Infected dogs or cats may withdraw and avoid contact with people or become unnaturally aggressive. Once clinical signs appear, death is inevitable. The time between infection and positive signs being shown may be very long (several months) but since most animals bite other animals around the head and mouth, the virus usually reaches the brain quite quickly, and the incubation period may be as little as two to three weeks. Rabies is a major public health concern. Due to the routinely fatal outcome of rabies infection in dogs and cats, and the potential for human exposure, rabies vaccination is compulsory for all dogs and cats in RSA. 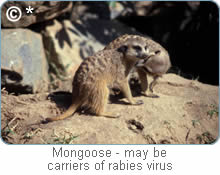 Canine parvovirus is the most important intestinal disease, which may cause severe bloody diarrhoea in dogs of varying ages. It is otherwise known as “cat flu”. Parvovirus infection is especially dangerous and deadly for puppies and very old dogs. In some instances, this disease leads to secondary heart disorders. Parvovirus normally infects the dog's intestines, lymphoid tissue and bone marrow. The result is vomiting, diarrhoea, severe dehydration and immune system suppression.  The black and tan breeds seem to be more prone to this virus. 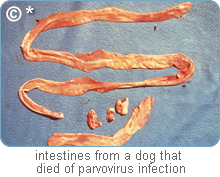 Canine distemper is a widespread, often fatal viral disease in which the early symptoms are similar to those of an upper respiratory infection in man. It is characterised by diarrhoea, vomiting, coughing, fever, seizures, skin lesions, lethargy and watery or pussy discharge from the eyes and nose.  If left untreated, signs of neural involvement may appear, including localised muscle twitching and convulsions. Distemper is often resistant to treatment, but can be prevented through vaccination.

This highly contagious disease is caused by a canine adenovirus (CAV-1). It has no connection with hepatitis in man. Dogs catch the disease by swallowing material contaminated by faeces, saliva or urine from infected dogs. The incubation period is 5 - 7 days, but it may strike suddenly, and the dog may pass from apparent health to acute illness within 24 hours. Puppies in their first year of life are most commonly affected but all ages of dog are susceptible. Early signs include generalised illness and lack of appetite, pale conjunctiva and gums, significantly raised temperature, vomiting, diarrhoea, and abdominal pain. Yellowing of the whites of the eyes (jaundice) may occur. Some dogs, after recovering from hepatitis, show a blue cloud over the whole of the cornea of one or both eyes (blue eye). In most cases this clouding will disappear within a few days without additional treatment but, if it persists, veterinary advice should be sought. 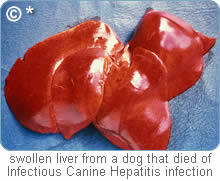 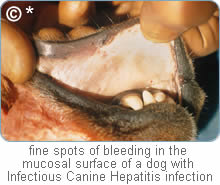 A contagious virus which spreads rapidly in susceptible populations. It has a short incubation period of 1-4 days before clinical symptoms of mild diarrhoea appear and then the virus spreads through faeces. The shedding of the virus, after clinical symptoms have cleared up, can last for several months. Once ingested, the virus replicates in the small intestines. A Canine Corona Virus infected dog is much more vulnerable to infection with Canine Parvovirus and vice-versa. There is evidence that “dual infections” of Canine Corona Virus and Canine Parvo Virus produce a much more severe diarhhoea than when either micro organism attacks alone.

Although Kennel Cough or Infectious Tracheobronchitis (ITB) is considered a complex disease, (different viruses and bacteria are implicated in its cause), the most important bacteria involved is called Bordetella bronchiseptica. A close association with other dogs, for example in a kennel situation and/or the confinement of dogs, facilitates the spread of the disease syndrome. Antibiotic therapy has been shown to be generally unsuccessful in reducing or eliminating B. bronchiseptica infection in dogs. Canine kennel cough is usually a mild, self-limiting disease, but it can develop into a severe bronchopneumonia, especially in younger dogs. The most common sign of this disease is a harsh unproductive cough that leads to gagging, retching or even vomiting.

Both viruses are implicated in canine respiratory disease with coughing, sneezing and nasal discharge as common symptoms. They can predispose the animal to more serious infections like Infectious Tracheobronchitis where symptoms like coughing are much more severe and may lead to bronchopneumonia.

This is a very serious disease caused by a group of bacteria called Leptospires. The bacteria is carried by rats, and is transmitted to dogs which kill rats or play with dead vermin. Dogs may also be infected by rat urine on the ground, in ponds or water bowls. The disease is particularly prevalent amongst dogs on farms. Incubation period is 5-15 days before symptoms like high temperature, severe thirst, increased frequency of urination, abdominal pain, depression, possibly ulceration of the mouth, diarrhoea containing blood, jaundice and persistent vomiting appear. Leptospires excreted in the urine of the dog during this illness, and possibly for months after apparent recovery, can infect other dogs and also humans. Particular attention should be paid to hygiene when attending to a sick dog especially when clearing up the urine.

* Image courtesy of the Department of Veterinary Tropical Diseases, University of Pretoria.

Disclaimer: Zoetis takes no responsibility for any claims that may arise from information contained in this information sheet. Individual situations may vary from location to location and it is recommended that you consult your veterinarian before any management or treatment decisions are implemented.

Regulatory constraints and medical practices vary from country to country. Consequently, the information provided on the site in which you enter may not be suitable for use in your country.